appear to a devotee during a Christmas meditation service with Paramahansaji~~A day or so after one particular meditation, during a service or class Master was conducting, he asked the congregation: “Would the person who saw Christ please stand up.”

An elderly frail woman stood up and Master asked her if she would share with others what she saw. She said that she had never before had visions or saw anything in her meditations, except felt intuitively the presence of God and Christ, but this time during the Christmas meditation she was praying to Jesus as a friend, asking him that he come to her.

Christ’s face emerged from the spiritual eye and he was looking at her for a while, then later withdrew again.

As she was telling about her vision, she saw once again in the back of the temple Christ standing there with two other people. She also saw many angels everywhere.

Master saw what she was seeing too and asked her once again to tell the others present and she did so. He asked her who were the other two, but she had said that she didn’t notice because she had focussed on Christ.

Then Master said, ‘They were Lahiri Mahasaya and Sri Yukteswar.’

A Bro. Bhaktanandaji Christmas Meditation Story from a devotee Note

The Real Benefits to ones life from regular deep Kriya yoga meditation from SRF.

Meditation can be enriched by Group Meditation,
Yoga Meditation and Kriya Yoga meditation is life empowering and freeing.
Self-Realization Fellowship Lessons course on Kriya Yoga
will take you all the way to divine realization!
Life does get better and better as you work out and/or dissolve your Karma…
Harvard neuroscientist: “Meditation not only reduces stress, here’s how it changes your brain.” 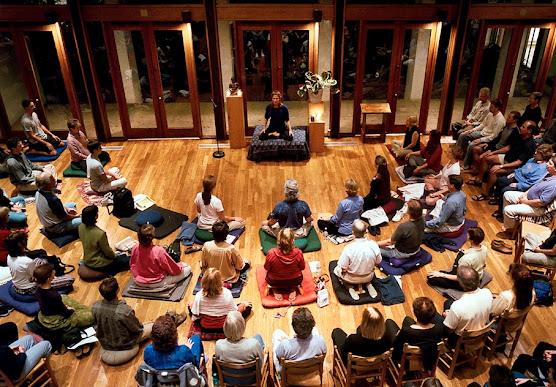